Traveling from Delaware to Antarctica is no easy feat.

It requires flying from Philadelphia International Airport or Baltimore-Washington International to Punta Arenas, Chile, then boarding an icebreaker — the ARSV Laurence M. Gould — to cross the Pacific Ocean to Palmer Station on the West Antarctic Peninsula. The sea voyage takes four to seven days, depending on weather and sea conditions, and includes sailing through Drake Passage, which spans more than 600 miles long and connects the southeastern Pacific Ocean and the southwestern Atlantic Ocean. UD researcher Matt Oliver has made the crossing three times, once with the flu.

The grocery store is what you might call a hotspot for food, and we go there a lot. The average household consumer visits the grocery store 1.6 times per week, according to the Food Industry Association.

Have you ever considered where these groceries come from? Some items are locally sourced, sure. But most grocery stores use a transport network to bring food to the store from all over.

University of Delaware researchers Matthew Oliver and Katherine Hudson think that some biological hotspots in Antarctica may operate the same way, less like local farms and more like grocery stores. They suspect that food resources on the West Antarctic Peninsula are being transported in by different current systems the way that trains, trucks and planes transport goods to the grocery store. If they are correct, it could provide new information about how this ecosystem will be affected under climate change. 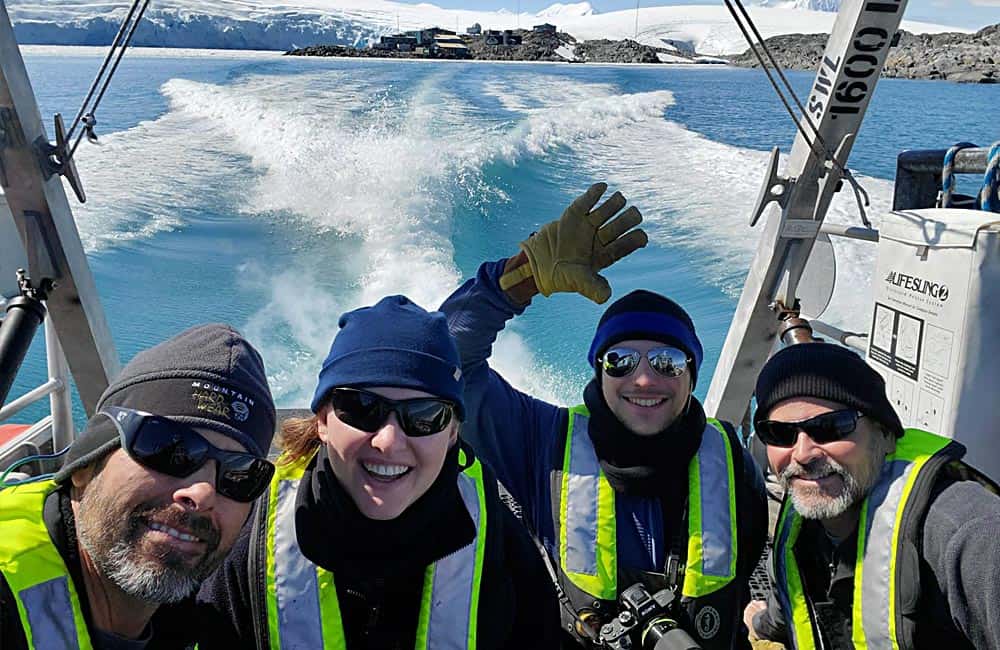 Specifically, Oliver and Hudson are studying krill — the area’s keystone species — and whether the waters surrounding Palmer Station form a kind of “grocery store” for local penguins, whales, seals and more that thrive there.

The West Antarctic Peninsula has long been viewed as a hot spot of biological activity. The researchers want to better understand whether the physics of how water moves influences the amount and type of food available in the region. 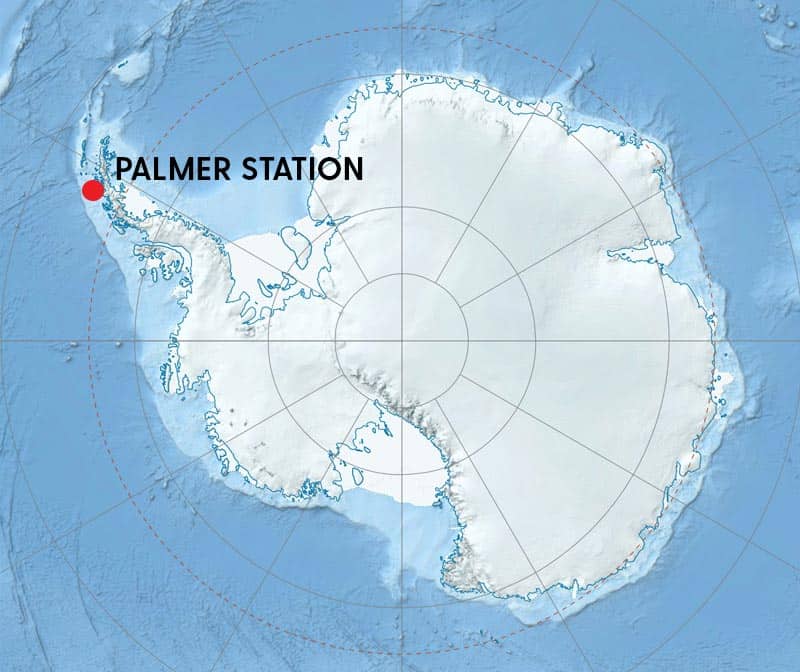 It’s all about location

Palmer Station is a United States research station situated on the West Antarctic Peninsula. Located on Anvers Island, it is the only U.S. station located north of the Antarctic Circle. It is named for Nathanial B. Palmer, a Connecticut sealer who, in 1820, is thought to be the first person to see Antarctica during an expedition. 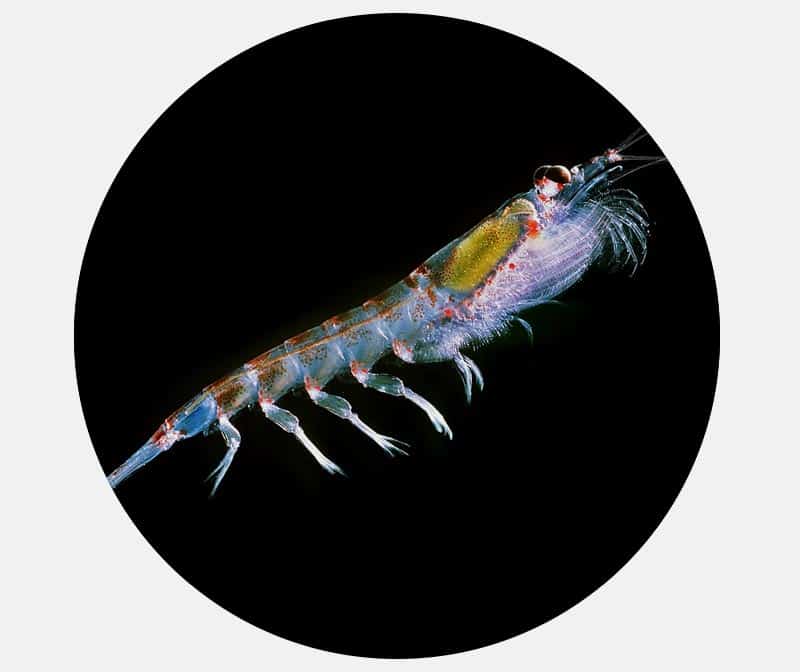 Krill, king of the
food chain

Small but mighty, krill may measure only about 2 inches long, but they serve a giant role in the global food chain as a key food source in the marine food web. They resemble shrimp-like crustaceans and are the meal-of-choice for marine foodies like whales, penguins, seals, fish and more.

What do krill nosh on? Phytoplankton, microscopic plant-like organisms that form the base of the marine food chain.

A trip with purpose

Though challenging to reach, Matt Oliver will gladly make the trip to Antarctica again and again because he feels a tremendous responsibility to take care of the planet, at all scales. Part of this work involves understanding what will happen to the world’s ecosystems as our climate continues to warm and change.

Oliver and graduate student Katie Hudson spent time at Palmer Station from December 2019 to March 2020, during summertime in Antarctica. The days were long — the sun sets around midnight and rises between 2:30 and 3 a.m. — making it easy to work late into the evening. In good weather, Oliver and Hudson spent time in the field. When the weather was poor, Oliver could be found in Palmer Station’s library, galley or office analyzing data or planning.

“It’s not easy to get there, so you better be busy while you are there,” said Oliver.

If it was a nice night, Hudson enjoyed an after-dinner walk to take in the extraordinary views in what is known as “the backyard,” the rocky area between Palmer Station and the glacier behind it.

“Unfortunately, the backyard has gotten a lot bigger over the past several years, but it is a great place to explore and see wildlife or watch the glacier calve (break off icebergs),” said Hudson.

As the researchers prepared to leave Antarctica mid-March, borders across the world were closing due to mounting concerns about the coronavirus pandemic. Worries about whether their air flights would be cancelled made for a lot of uncertainty as multiple carriers reduced the number of flights being offered. Thankfully, with support from the U.S. Antarctic Program, the research team arrived home safely with only a one-day delay.

The work builds on Oliver’s previous research in Antarctica that showed Adélie penguins forage for food by responding to certain physical ocean properties, like currents and tides, that act as feeding signals in certain areas. Oliver and Hudson theorize that krill and plankton actually are being injected into the region from offshore, rather than spawning and developing in Palmer Canyon itself.

No one really knows what drives krill distributions, but it is an important question because of the critical role krill play in supporting other organisms in the marine food web. The UD researchers are collaborating with partners from several institutions, including Rutgers University, University of Alaska, Old Dominion and Oregon State, in an effort known as “Project Swarm” to explore how krill collect and move in the region. Autonomous underwater vehicles (AUVs) are a key part of the work, traveling beyond where humans can go to collect important data about the environment, water conditions and marine organisms that call the sea home.

The researchers are using a physical computer model developed by colleagues at Old Dominion to understand the current systems that circulate water throughout the Palmer Canyon and connect it to the broader ocean. The model is part of the Regional Ocean Model System (ROMS) that covers the entire West Antarctic Peninsula.

The research team has seeded the computer model with theoretical particles to represent the krill and are working to calculate how long krill transported from offshore are likely remain in Palmer Canyon. They plan to compare this data with actual field data collected by an AUV called a Slocum Glider, in order to confirm whether what they see in the models matches the krill distributions they see in the real world.

Working with colleagues at Old Dominion University, Hudson also is using SWARM data to model whether tides or local recirculating currents within the canyon, known as eddies, are keeping krill transported from offshore in Palmer Canyon. The glider is equipped with an echosounder, a device that uses sound echoes to pinpoint objects in the ocean. Capable of detecting fish and krill, the echosounder enables the researchers to see and measure krill, which travel in fast-moving swarms, underwater. 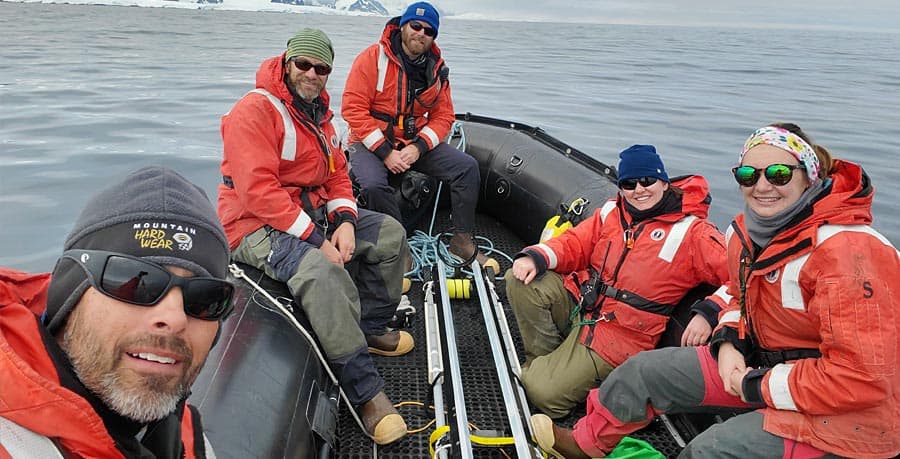 “Between the new acoustic systems on the gliders and the acoustic surveys we collaborated on with the Long-Term Ecological Research (LTER) group, we will have a good idea of what the krill distributions look like in the system.”

If the researcher’s hunch is correct, it could provide new clues as to why this region of Antarctica is such a biological hot spot for marine activity. It also could provide insights that can be applied to other broader ecosystem questions.

“We’re really trying to understand the sensitivities and the potential refugia — areas where organisms can survive through unfavorable conditions — that might exist for marine systems as climate change progresses,” said Oliver. 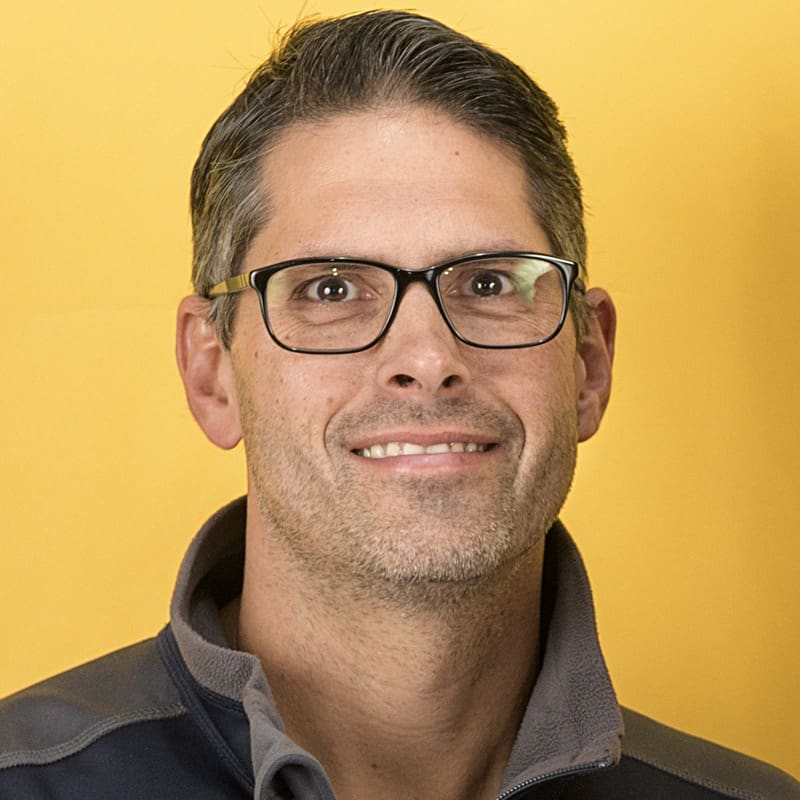 Matthew Oliver, the Patricia and Charles Robertson Professor of Marine Science and Policy in UD’s College of Earth, Ocean and Environment, studies how the ocean environment shapes where marine organisms live and how their distributions are evolving under climate change. He has a doctorate in oceanography from Rutgers University. 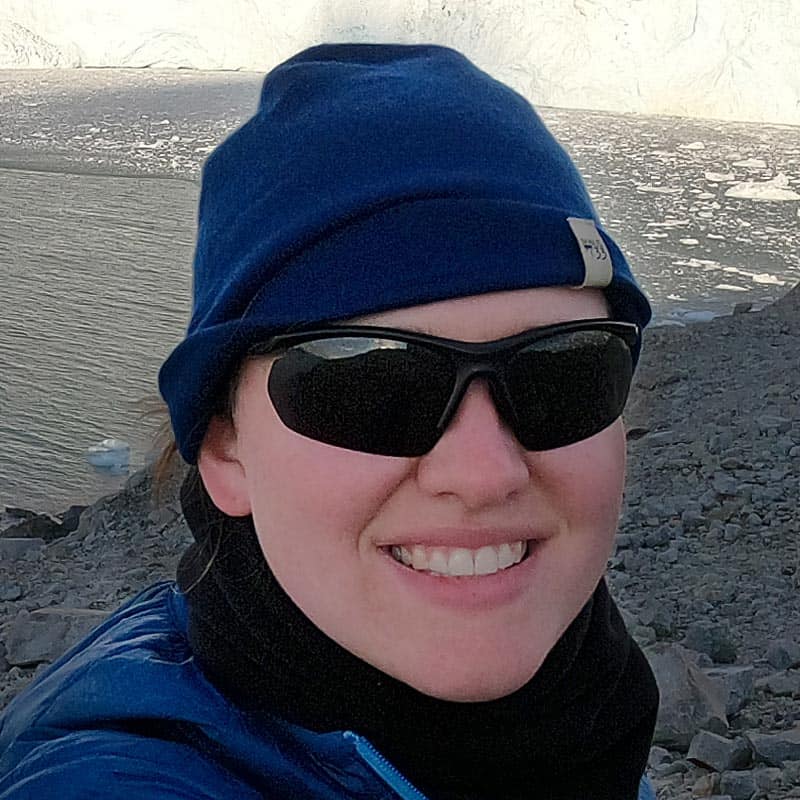 Katherine Hudson is a UD doctoral candidate and a Patricia and Charles Robertson Fellow. She is using underwater autonomous robots to study the impact of physical ocean processes on food web ecology. Passionate about outreach, Hudson can often be found working alongside other Blue Hens to inspire middle and high school students to pursue careers in science. Hudson earned a bachelor of science in marine biology from Northeastern University in 2017. She previously spent four months conducting research at the Bermuda Institute of Ocean Sciences in Bermuda as part of a Research Experience for Undergraduates program.