Every 10 minutes, another name is added to the national organ transplant list, and the agonizing wait begins. Professor Sambeeta Das’ dream is to develop self-driving microrobots that would act like “helper bees,” working with engineered stem cells, actually doing nanosurgery at the cellular level to create artificial organs and fill a dire need. Pre-pandemic photo by Evan Krape

Meet me on the cutting edge

“Just call me Sam.” That’s what Professor Sambeeta Das will ask of you, with a warm smile.

But don’t let her humility fool you. She’s boldly forging into little-known territory, into an exciting world you can see only with high-powered microscopes, where sci-fi meets reality.

The assistant professor in UD’s Department of Mechanical Engineering and her students are designing microrobots so small they could get lost inside a human cell. The very tiniest measure about 7 angstroms, the size of a molecule of glucose. The largest are only 10 microns long. A single hair on your head is 20 times thicker.

She envisions many uses for such teensy bots someday, particularly in the medical arena, from delivering a payload of drugs directly to a diseased cell, to sorting sperm for use in artificial insemination. But her dream is to develop self-driving microrobots that would act like “helper bees,” working with engineered stem cells, actually doing nanosurgery at the cellular level, to create artificial organs.

Such a microrobot would come back to its docking position at the end of the day like a Roomba vacuum and be programmed to dissolve after 24 hours or whenever its job was completed. She envisions that 20 years from now, with the help of microrobots, we could have an automated system to generate organs on demand.

It is a need that affects tens of thousands of families. Twenty people die each day in the United States alone, waiting for a new organ. Every 10 minutes, another name is added to the national transplant list, and the agonizing wait begins. Often, it is a bittersweet scenario, with one life ending, as the priceless gift of more time on this planet is conferred to another. The average wait for a person needing a heart transplant is more than six months; the average wait for a kidney is more than three years. 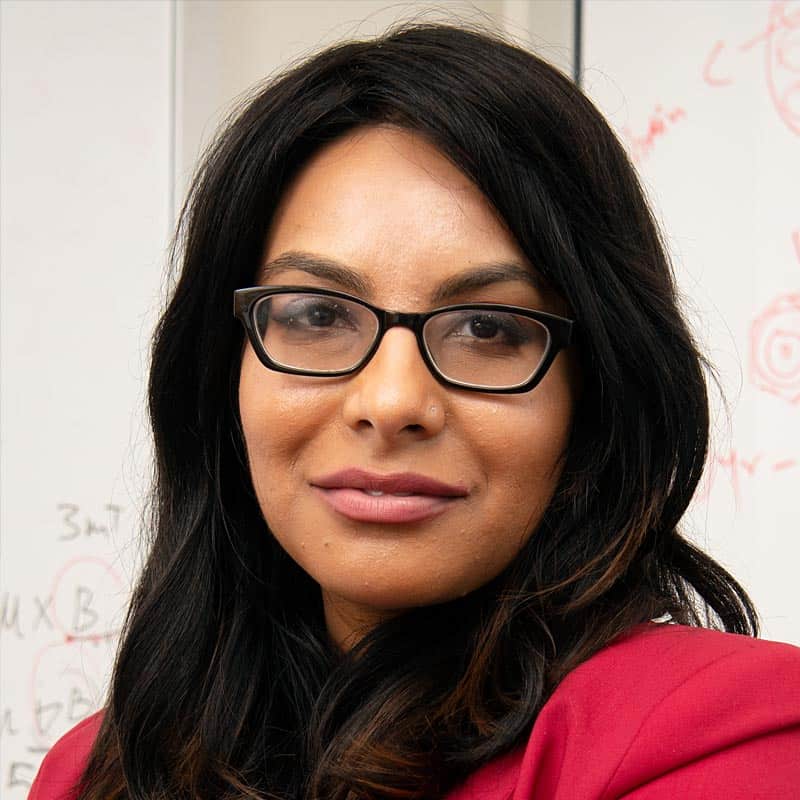 Sambeeta Das joined UD’s Department of Mechanical Engineering as an assistant professor in 2019. Her research focuses on developing microrobots capable of precision delivery of biochemicals and cellular patterning for use in personalized therapeutics, drug delivery and artificial organs. With work spanning robotics, autonomous systems, physics, organic chemistry, materials engineering, soft matter and biomedical engineering, she is both a practitioner and proponent of interdisciplinary research that serves society. She has a Ph.D. from Penn State, a master’s with distinction from the University of London and a bachelor’s in physics from Presidency College, India.

The microrobots that Das and her students are developing don’t have arms and legs (which many people seem to think a robot has to have). Navigating through blood vessels and cells, they really wouldn’t need such appendages, she explained.

Instead, these experimental bots are made in UD’s high-tech Nanofabrication Facility using photolithography — a printing technique using light — and vapor and chemical deposition techniques that apply infinitesimal amounts of metals or biocompatible polymers in a specific pattern. Dust is an enemy in such manufacturing, which is why this specialized facility with its extreme clean conditions is a necessity, and technicians must wear clean room garb to prevent skin and hair from being shed into the environment. 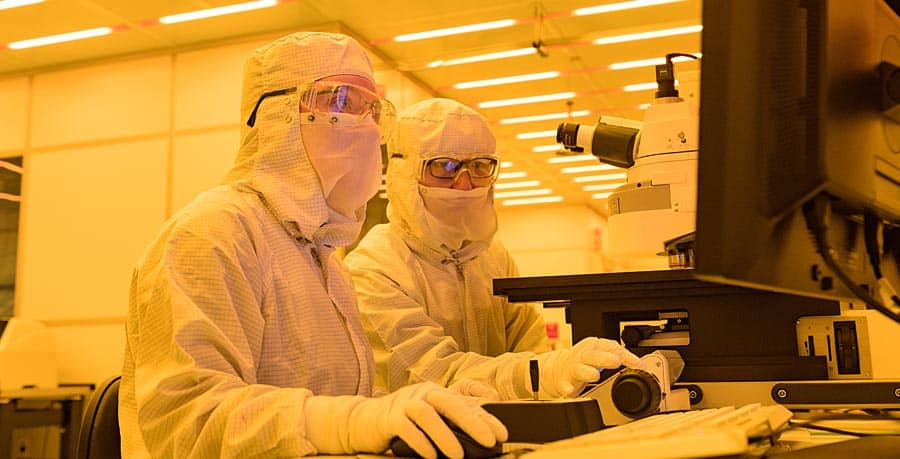 Once the microrobot is made, organic chemistry is used to attach various chemicals to it. The team currently is testing a microrobot shaped like a bullet with a magnetic coating inside, which allows it to be guided with a magnetic field or with sound.

Das is ever-mindful of the practical applications as her team takes pioneering steps toward a future that will transform medicine. That’s a key reason why the team is designing microrobots that would respond to sound or light. Hospitals already have ultrasound equipment, and it’s much cheaper than magnetic resonance imaging.

“Instead of thinking about compatibility and cost at the end, we are thinking of those things at the beginning,” she said.

She’s also experimenting with self-driving robots. These are not controlled with magnets or sound, but move and direct themselves using energy created by their own chemistry.

While Das has been on the UD faculty only since fall 2019, she already has received two grants from the National Science Foundation in the past few months — a $299,393 grant from the Biomaterials Program and a $273,841 grant from the Growing Convergence Research program.

“Convergence research” — integrating knowledge, methods and expertise from different disciplines — has been identified by NSF as one of the 10 Big Ideas that will push the frontiers of U.S. research forward, providing novel approaches to solving some of the world’s most pressing problems. In her project, Das is exploring using microrobots to regulate gene expression in liver “organoids,” which are 3D cultures of liver cells originating from biopsies or from stem cells. Her goal is to get microrobots to generate the hexagonal patterns of the liver’s building blocks, called lobules. If successful, the project could define a new area of robot-assisted biological design.

In the related NSF biomaterials project, Das and colleague Kristi Kiick, Blue and Gold Distinguished Professor of Materials Science and Engineering, will work on microrobots capable of triggering the delivery of molecules, such as therapeutics, at desired coordinates with high precision. The project also includes a plan to engage K-12 girls and their caregivers in hands-on robotics activities that will enhance learning strategies and stimulate interest in STEM.

It’s no surprise that Das is among the mavericks leading the charge in microrobotics. At the age of 10, she knew she wanted to be a scientist. She’s the first person in her family to earn a Ph.D., venturing from her native India, first to the United Kingdom for her master’s in organic chemistry and then to the U.S. for her doctorate at Pennsylvania State University with Ayusman Sen, where she got hooked on microscale robots. As a postdoctoral scientist at the University of Pennsylvania, working with roboticist Vijay Kumar, she applied her skills to a fascinating array of projects, including refining the control of a swarm of drones.

Attracted to the University of Delaware by the interdisciplinary culture she loves, the robotics cohort “doing fantastic work,” and opportunities to work with faculty not only in the Department of Mechanical Engineering but other disciplines like physics and chemical engineering as well, Das is right at home and eagerly rolling up her sleeves.

“I’m really excited about what I’m doing,” Das says. “This work is not just cool scientifically, but hugely relevant, with tremendous potential to help people. I’m not a scientist toiling in an ivory tower. I tell my students, it’s very important that whatever research you do, you want to make sure there are real-world applications. I look at it as ‘there has to be a tangible product, and these are the problems we can solve with it.’”

Her dream is to use microrobots to help make artificial organs.

• On average, 20 people die each day in the U.S. due to the lack of available organs for transplant.

• Almost 114,000 people in the U.S. currently are on the waiting list for a lifesaving organ transplant 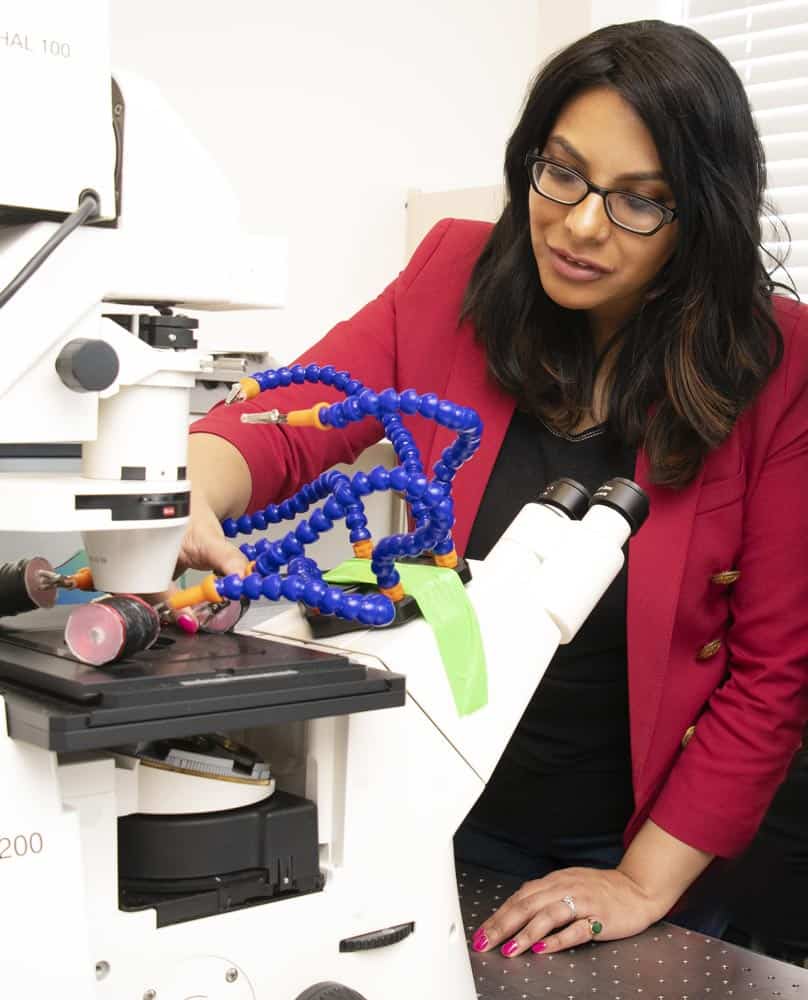 “This work is not just cool scientifically, but hugely relevant, with tremendous potential to help people. I’m not a scientist toiling in an ivory tower. I tell my students, it’s very important that whatever research you do, you want to make sure there are real-world applications. I look at it as ‘there has to be a tangible product, and these are the problems we can solve with it.’” 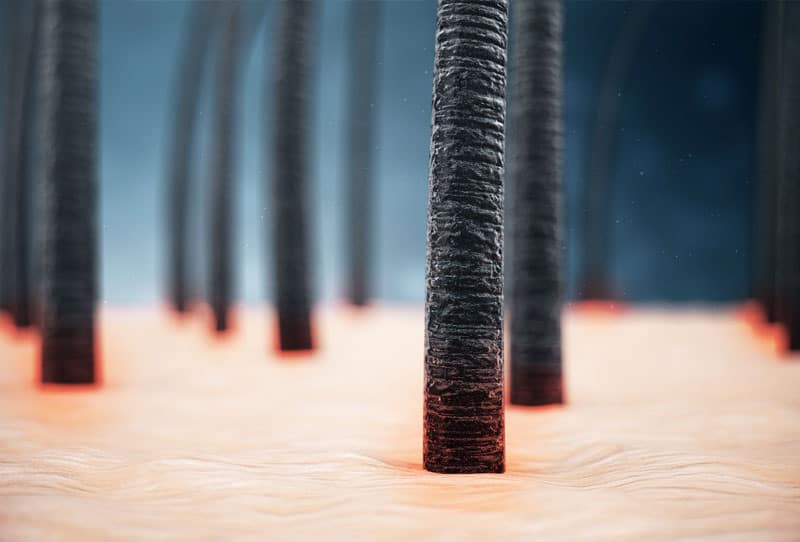 How small is a microrobot?

• The smallest Professor Das is working on measures about 7 angstroms, the size of a molecule of glucose.

• The largest is only 10 microns long. To compare, a human cell is 100 microns across, and a single hair on your head is 200 microns thick.