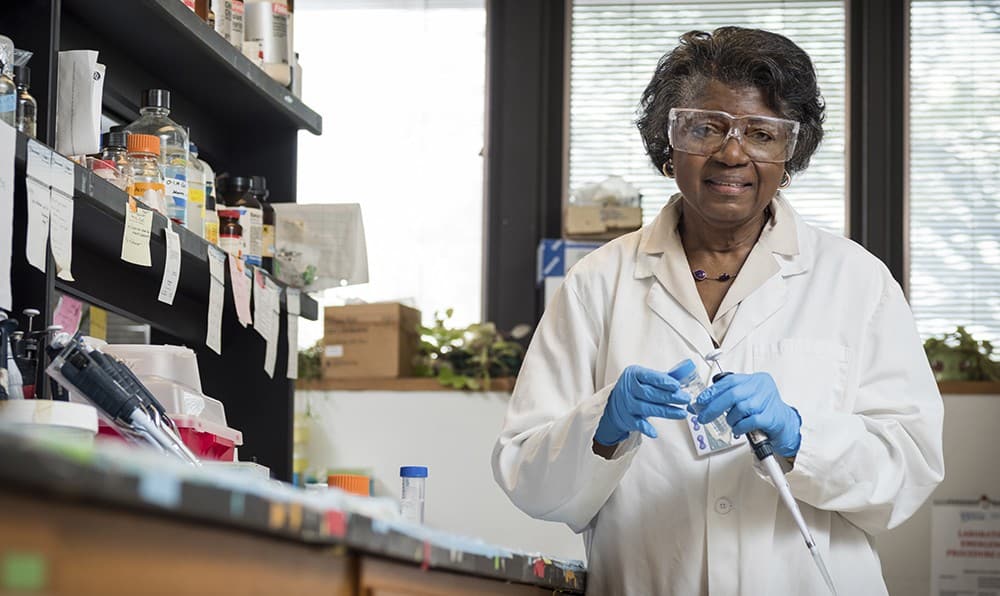 Patricia DeLeon, professor of biological sciences and member of the Board of Trustees at the University of Delaware, and two graduates, Jo Anne Deshon and Karen Fredricks, will be honored by President Barack Obama for excellence in science, math and engineering teaching and mentoring.
The Delaware trio will receive the Presidential Awards for Excellence during a White House ceremony in the fall.

DeLeon, will receive the Presidential Award for Excellence in Science, Mathematics and Engineering Mentoring, which is presented each year to individuals or organizations in recognition of the crucial role that mentoring plays in the academic and personal development of students studying science or engineering and who belong to minorities that are underrepresented in those fields.

Deshon, a first grade teacher at John R. Downes Elementary School in Newark, Del., and Fredricks, a fourth grade teacher at Thurgood Marshall Elementary School in Newark, Del., will each receive the Presidential Award for Excellence in Mathematics and Science Teaching, which is awarded annually to the best pre-college-level science and math teachers from across the country.

“There is no higher calling than furthering the educational advancement of our nation’s young people and encouraging and inspiring our next generation of leaders,” Obama said. “These awards represent a heartfelt salute of appreciation to a remarkable group of individuals who have devoted their lives and careers to helping others and in doing so have helped us all.”

DeLeon, who was nominated by UD Provost Tom Apple in his previous position as dean of the College of Arts and Sciences, said she is blessed to have chosen a career that has exposed her to generations of bright students, many of whom have done remarkably well in their careers, and some of whom have ultimately become her colleagues and friends.

“Professor DeLeon has transformed the lives of many young scientists, both undergraduate and graduate students who worked in her laboratory, and young faculty members here at UD and elsewhere,” Apple said. “A large number of her mentees have secured successful positions in the academy and they were very eager to support her nomination for this national, presidentially-conferred award.”

DeLeon has mentored more than 100 trainees, including undergraduates, graduate students, postdoctoral fellows and visiting scientists from around the world. A large majority of her undergraduate mentees are women and about one-third of them are minorities. She also has mentored young faculty in the early stages of their careers.

“While the true honor has been partnering with students as they create and build their scientific careers, I am thrilled to be a recipient of this tremendous award which recognizes the importance of women and minorities in scientific, mathematic and engineering fields,” DeLeon said. “I am looking forward to my visit to the White House.”

“It’s such an honor to be chosen, but the honor should also go to so many of my colleagues who work hard everyday in their classrooms,” Deshon said. “So many educators deserve the same honor, but either aren’t nominated by their administrators or peers or are so busy with their teaching that they don’t take the time to apply for the award.”

Fredricks, who earned a degree in elementary education from UD in 1975, said she is thrilled to be honored for teaching mathematics and by the possibility of meeting Obama during the award ceremony.

“Math was not a strong subject for me, so 14 years ago, when I heard about teaching to the standards, I decided it was an area that I needed to really work on,” Fredricks said. ” I now know that math is for everyone. Receiving this award validates my belief that all children can learn math if given the opportunity to explore numbers, think through problems, develop their own strategies for solutions and share these ideas with other students, rather than to memorize combinations and procedures without understanding how they work.”

Each award winner will receive $10,000 from the National Science Foundation. They also will receive an expense-paid trip to Washington, D.C. for the White House awards ceremony and several days of educational and celebratory events, including visits with members of Congress and science agency leaders.

The winners are selected by a panel of distinguished scientists, mathematicians, and educators following an initial selection process done at the state level. Each year the teaching award alternates, going either to science and math teachers in grades K through 6 — as it is this year — or to those teaching in grades 7 through 12.

A 1996 nominee for the Howard Hughes Medical Investigator Award, DeLeon now has three patents issued or pending and her research has been supported by both the NSF and the National Institutes of Health. She has received many honors and awards, including the National Science Foundation (NSF) Career Advancement Award and the Medical Research Council of Canada Postdoctoral Fellowship.

A 1992 gubernatorial appointee to the UD Board of Trustees, DeLeon was re-appointed in 2005. She is a member of the Academic Affairs Trustee Committee.