Left to right: MakerGym technician Donna Svinis models one of the face shields she helped design and produce. Whitney Sample, co-director of UD’s Design Studio, holds an early sample of the mask while standing outside UD’s Spencer Lab, home to the College of Engineering’s Department of Mechanical Engineering. Martha Hall is director of innovation for UD’s College of Health Sciences.

While the coronavirus pandemic has upended our lives in many ways, the pandemic cannot stop the compassion and creativity of the University of Delaware community.

In mid-March, research labs and health clinics across campus donated thousands of pieces of personal protective equipment (PPE), including surgical masks and gloves, N95 respirators, lab coats and Tyvek disposable gowns to the Delaware Emergency Management Agency for distribution to those front line responders in greatest need across the state.

Since then, virtual networks of UD makers have emerged to answer the call for more PPE to help police officers, firemen, health care workers, pharmacy and grocery store workers, perhaps family and friends in your own neighborhood. This story shines a light on UD’s MakerNetwork.

When UD’s Jenni Buckley answered her cell phone, she could immediately tell that her friend, Lisa Lattanza, was worried. Dr. Lattanza, chair of orthopedics and rehabilitation at Yale School of Medicine, had already seen 15 cases of COVID-19 by late March, and she was concerned her hospital could run out of face masks. Her voice was urgent.

“What can you create for me fast?” she asked Buckley, who is an associate professor of mechanical engineering and director of the Design Studio at UD. Buckley and Lattanza co-founded the Perry Initiative, which sponsors outreach programs to inspire young women to be leaders in engineering and medicine.

Previously, Sample had worked at the hospital, where, among other innovations, he co-invented an exoskeleton to give children with debilitating conditions such as arthrogryposis the ability to lift their arms.

Sample and Buckley discussed ideas with Lattanza at Yale and colleagues at A.I. duPont. They began scouring face mask designs on GrabCAD, an open-source forum of over 7 million engineers, designers, manufacturers and students.

“The designs that were out there were a great start, but there were issues with functionality and we were in a unique position with our training and resources to tackle that,” said Sample, an industrial designer by training, with 20 years of experience in the medical field.

The clinicians wanted a mask that sat out from the face, so that breathing humid air would not impact the integrity of the filter.

So Sample and Buckley and their team, which included faculty, students and clinical partners, set out to build a better face mask. And so the “HensNest” was born.

Sample’s idea was to pursue a lofted wireframe design — a frame so thin it would take only 10 minutes to 3D print and then could be assembled into a mask like a pop-up card. He began with an open-source design called the “DIY Face Mask” by Mark Fuller at GE Additive. Then the UD team added their innovation twists and put the design back out on GrabCAD and the National Institutes of Health (NIH) 3D Print Exchange for other engineers to hack.

“The beauty of the maker community in times like these is that we’re all sharing our design ideas in open-source forums,” Sample said. “We’ve released two versions of the HensNest design thus far and have received great feedback and willing partners internally here at UD and also across the country.”

The HensNest consists of only a few plastic pieces that snap together. They include the “face hoop,” the X-shaped “spider” that gives the mask its convex shape, and a triangular containment hoop that holds a swatch of filter material (Sample has used part of a HEPA furnace filter) neatly tucked into place. The triangular frame fits snugly around the bridge of the nose, the cheeks and under the chin, while the convex shape positions the filter comfortably off the nose and lips.

The HensNest is not approved by the U.S. Food and Drug Administration and has not undergone respirator fit tests yet. Once testing is done, the UD team said the results will be posted as soon as they are available, along with recommendations for filter materials.

Celanese Corporation is preparing to manufacture the HensNest at its northern Kentucky facility using injection molding, an industrial process used to mass-produce plastic items. The company said it expects to make 2,000 of the face masks a day for use in its local community.

Meanwhile, the UD team is working to get the design out to more maker groups.

“I’m a big fan of scalability,” Buckley said. “If people do have a maker group, they can take this design and start cranking on it.

Buckley is stoked about the progress, and she credits Sample with all the design chops.

“We’re engineers,” Buckley said. “When there is a problem to solve, that’s like candy to us. We just want to be helpful. That’s what our profession is all about.” 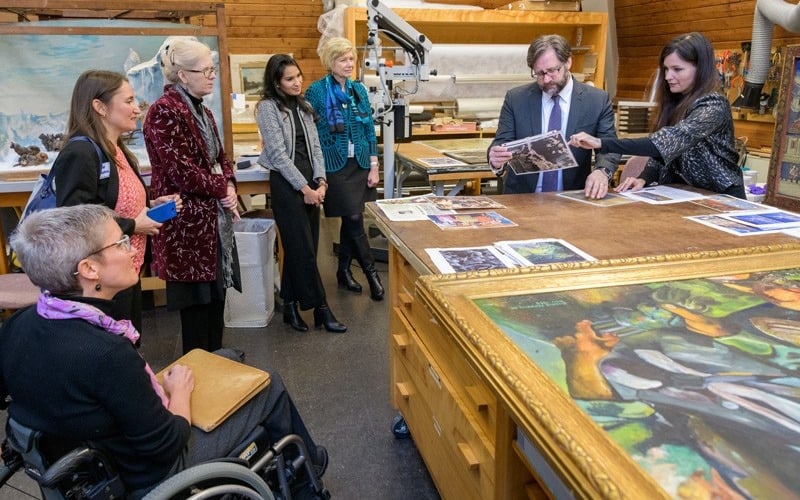