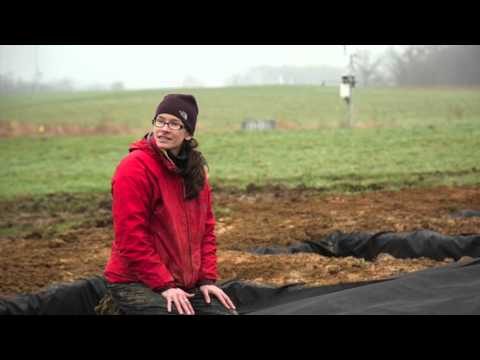 Communications Specialist,
UD College of Agriculture and Natural Resources
Having had the chance to conduct research taking water samples on the Chesapeake Bay early in her undergraduate studies, Angelia Seyfferth, assistant professor in the Department of Plant and Soil Sciences, is hoping to pass her enthusiasm for research to young scholars in her lab.

Seyfferth’s research at UD focuses on arsenic in rice, a topic for which she received a prestigious Faculty Early Career Development Award from the National Science Foundation. It recognizes faculty who exemplify the role of teacher-scholars through outstanding research, excellent education and the integration of education and research within their organizations.

That funding award led to the installation of the first experimental rice paddies in Delaware, which are being used to aid Seyfferth’s research on potential methods to lower arsenic levels in rice—a staple crop for nearly half the people on Earth—as well as allow her to use the paddies as a teaching tool for UD graduate, undergraduate and local high school and middle school students.

Seyfferth says she enjoys knowing the research she is conducting has the potential to impact society. She also loves passing that knowledge on to new students.

“Both of those things really drive me on a daily basis,” says Seyfferth. “I get to work with students and get them excited about research. I enjoy getting young people involved in research at an early age because it was so critical for me to get to where I am today.”

Seyfferth credits her early career success to working with excellent students, having a strong lab group and support from faculty in her department and across the University.

She says that time management skills also have been important, as well as having support from her family.

“As a woman researcher, my partner is also a researcher and so sharing that responsibility makes it possible. That’s one thing that I try to portray to my students—especially the female students—is that you can have a family and a successful career without having to sacrifice them as long as you have the right support network,” Seyfferth says.

Seyfferth also notes that UD’s family friendly policies helped her when she gave birth to a son in the middle of her tenure process.

“UD has a very family friendly policy to allow for a delay in the tenure clock. As a tenure track professor, you have a certain amount of time to submit your dossier for tenure and if you have a child in that period, UD’s policy is you can opt for another year extension and so that’s been really helpful for me,” Seyfferth says.

The chance to make a difference in the world and to ignite a love of research in her students inspires Angelia Seyfferth’s work. She is studying ways to lower arsenic levels in rice, a prime source of food around the world.

In 2013, 24.3% of full professors in science, engineering and health in the U.S. were women. — National Science Foundation