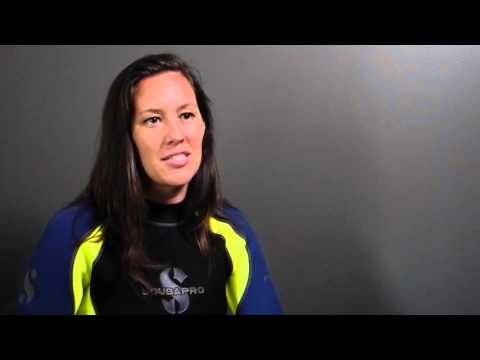 Communications Specialist,
UD College of Earth, Ocean, and Environment
A chance encounter with a tour guide at the Shedd Aquarium in Chicago is what sparked Minnesota native Danielle Dixson’s interest in marine biology.

“I was 5 years old and the guide gave me a book for asking a clever question about whales,” she says.

That gift led to a conversation with her parents about marine biology, and Dixson has been asking questions ever since.

Now a tenure-track assistant professor in UD’s School of Marine Science and Policy, Dixson’s research explores how marine animals, particularly fish and corals, use sensory cues such as smell to make decisions about habitat.

Coral reefs are degrading at an alarming rate due to global warming, ocean acidification, pollution and runoff, among other things, raising important questions about the future sustainability of marine life that call the reefs home. Most fish only move in a five-meter radius of their initial settlement site throughout their lifetime.

“If they make a bad decision initially, it’s pretty much life or death,” she says.

Dixson is interested in understanding how human-induced changes are affecting these decisions and what actions can be taken to help replenish reefs that fish deem as bad.

Her research was the first to demonstrate that ocean acidification has an impact on behavioral decisions in fish. Her study revealed that while the fish grow the same and seem normal, they spend more time away from their coral and can no longer make cognitive decisions, which equates to higher mortality.

“Exposed to the smell of both a predator and reef water, a control fish in present-day ocean water will avoid the predator. Fish treated to ocean acidification levels expected by the year 2100 prefer the predator’s smell. They still sense the cue, but they no longer recognize what the smell means,” she says.

Dixson is a big thinker, and she hopes to leverage her research to affect global policy and conservation efforts.

Her research has been widely published in journals such as Science, Proceedings of the National Academy of Sciences and Marine Ecology Progress Series and has been featured in news media including the New York Times, Washington Post and NOVA.

Like the early pioneers that inspire her, including Sylvia Earle, the first female chief scientist of the U.S. National Oceanic and Atmospheric Administration, Dixson hopes her work will “serve a greater purpose.”

“When I look back on my career, I want to see that I’ve had an impact, a hand in helping the world,” says Dixson.

Danielle Dixson started asking questions about whales when she was 5 years old. A Chicago tour guide’s encouragement ignited an ongoing curiosity that has taken her around the world, diving for answers among sharks, fish, corals and other ocean creatures.

In 2013, 24.3% of full professors in science, engineering and health in the U.S. were women. — National Science Foundation